During supervisors’ Wednesday night meeting, Todd L. Sherbondy, a certified arborist and sales arborist with 140-year-old Davey Tree Expert Co., spoke on behalf of Friends of White’s Woods. A few minutes into his brief public comments about the economic benefits of natural forests, Mr. Sherbondy, a two-decade resident of Indiana, Pa., made a passing reference to the township’s “logging plan” for the woods.

THE TREE EXPERT politely dodged and proceeded with his brief presentation. It included mention of “a main inherent benefit” of the woods — the market value of its capacity to store carbon dioxide, the greenhouse gas most associated with the worst effects of climate change.

Mr. Sherbondy hinted that the value of a living, growing forest that removes carbon dioxide from the air may exceed the value of trees sold to a sawmill after, you know, whatchamacallit. 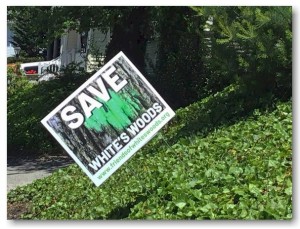 Mr. Sherbondy, on the other hand, said the existing living forest has a “stored value” of $643,945 worth of carbon dioxide, and the value grows with the trees in the forest.

At the crest of last year’s first wave of the pandemic, The Wall Street Journal began reporting that trading in such practices – environmental, social and governance practices, or ESGs – was brisk, driven in part by growing awareness in corporate America of the worsening climate-change crisis. By last summer, ESG trading had become “big business,” attracting global oil corporation BP. Chevrolet, Walt Disney Co., Capital One and others have been in the market for awhile.

To make up for their carbon emissions, companies are exchanging a “climate-change currency” earned through efforts to reduce or sequester greenhouse gasses. How? By “paying timberland owners to leave trees standing,” for example, The Journal reported. For White Township supervisors, that means they may market White’s Woods to carbon credit buyers instead of to sawmills.

RURAL APPALACHIA has a mixed legacy as a serial harvester of carbon from timber, coal, oil and natural gas. Its future now may include profitably storing that carbon in its forests.

Can Ms. McCauley and her White Township-supervisor colleagues see their forest for the trees? Their fiduciary responsibility to taxpaying constituents should demonstrate a willingness to invest in the long-term carbon-sequestering value of White’s Woods – instead of, you know, whatchamacallit.