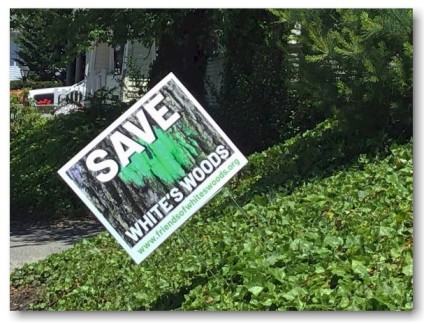 INDIANA — We have reviewed the claims made by Millstone Land Management owner Mike Lawer in his interview published June 14 in The HawkEye. Our critique of that Q&A is based on documents in the public record up to that point. In the coming week we plan to respond to Millstone’s management plan released by White Township on June 25.

This would devastate the park. An independent forester who reviewed the plan said, “It will look like a bomb went off.”

Lawer attempts to minimize public concern by saying that the figures in Millstone’s “management overview” were “just recommendations.” 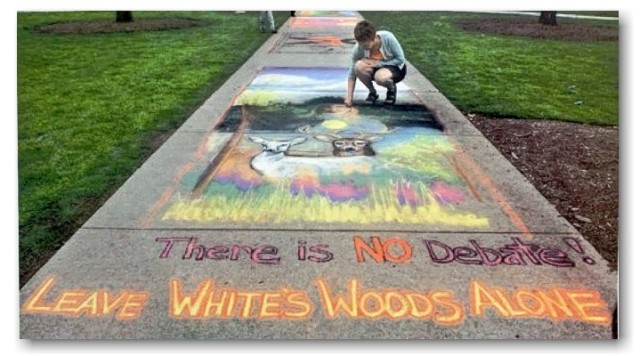 A student chalks a sidewalk in the Oak Grove at Indiana University of Pennsylvania in 1995 during the first of three efforts to log White’s Woods. The second was in 2007-2008. Photo by Tom Turify.

The Pennsylvania Department of Conservation and Natural Resources rejected the plan as “excessive” and not consistent with the goals of Project 70 — to protect land for recreation, conservation or historical purposes.

Now, Lawer proposes to take twice as much — “close to half the volume” of the forest. If the 2007 plan was excessive, Lawer’s new plan is beyond excessive.

We invite readers to go into the woods and look at all the towering, straight, healthy marked trees. In fact, in Millstone’s April 16 plan, the trees in White’s Woods are described this way: “The current timber stand is heavily stocked with mature standing timber.”

This invites a reader to question the characterization of the trees as compromised and “junky.”

Experts in the field would argue that “sustainability” means taking a holistic approach to forest health with an eye toward maintaining its long-term biodiversity and dynamic growth. Lawer is describing not a practice of environmental sustainability but rather extraction, plain and simple, because he is rendering the woods as a commodity to be exchanged in an exploitative market.

We certainly understand that there has been extraction practiced in large state forests. But let us be reminded that this is a community park. Lawer’s argument is that White’s Woods should be managed for long-term timbering. Indeed, in an April email with a correspondent shared with FWW members, Lawer wrote, “I am … managing a multi-million dollar resource that is losing thousands every year.”

What is his plan based on? Is this a reference to anecdotal evidence only? Lawer insists that neither education nor expertise are important, and he regards local, highly respected professionals — some who have garnered international acclaim — with open contempt: “I don’t want to be rude, but it’s kind of embarrassing to hear someone who claims to be a biologist say things like, this is a natural or a wild area.”

An assessment by IUP scientists posted on our website explains why his method would have disastrous results.

Actually, it is a public park. It is the position of FWW that no single person should determine the management plan for the White’s Woods Nature Center.

Concerned citizens ought to ask: what exactly is the basis of the decisions he has made? What informs his approach to the stewardship of public land?

By contrast, other foresters and biologists insist that good data must serve as the foundation for any forest stewardship plan. The constituents who use this much-loved nature center have every right to expect that any stewardship proposal would be drawn up through a thoughtful and deliberate process and that it be evidence-based.

IN ANOTHER INTERVIEW published in The HawkEye on the same day, forester Dave Babyak said Friends of White’s Woods should be part of a group to determine the goals and plans for a stewardship plan for White’s Woods.

FWW believes that all stakeholders, including Indiana Borough, park users and perhaps many others should be involved in developing a stewardship plan – and that experts in conservation, park management, ecology, hydrology and other evidence-based specialties should be involved, as well.

Jessica Jopp, of Indiana, is a board member of Friends of White’s Woods. She teaches in the English Department at Slippery Rock University.

Sara King, of White Township, is president of Friends of White’s Woods. She is an emeritus professor of psychology at Saint Francis University.

Norma Tarnoff, of White Township. is a long-serving board member of Friends of White’s Woods.