INDIANA – One of the sharper contrasts between Republican Joe Pittman and Democrat Susan Boser emerged about 27 minutes into their May 2 broadcast debate at Butler County Community College. In what may be the only face-off of the campaign, the candidates in the May 21 special election for the open 41st District state Senate seat (representing all of Indiana County) were asked about property taxes.

The debate moderator posed a two-part question: 1) Should the state force counties to reassess their real property for tax purposes sooner than every half-century, a nightmare for Indiana County taxpayers in 2015 and in Butler County now, and 2) who should pay for the reassessing?

Neither candidate answered the question head-on. (A correct answer would be, yes, counties should be required to reassess real property much more frequently than the state’s prevailing “for as long as you can get away with it before a judge forces you to stop kicking the can down the road,” and, yes, state assistance for the burdensome task should be extended to localities.)

But Mr. Pittman answered first, and he framed the debate by resting on bumper-sticker language in his campaign mailer. His response took no more than half his allotted two minutes.

“The best way to address the issue is just to eliminate the tax,” Mr. Pittman said to applause. “The property tax, particularly the school property tax, is an archaic, subjective way of taxation. It doesn’t belong in our form of government anymore. It should be eliminated.” 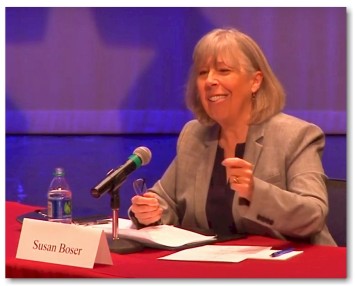 BOSER’S TURN, in contrast, was detailed.

“I’m not opposed to eliminating property tax,” she began.

Then, in two minutes, she summarized flaws in state Senate Bill 76, the main legislative vehicle for Mr. Pittman’s blunderbuss approach:

“In essence, it’s shifting the tax burden to individuals and people who are already hard-pressed,” Ms. Boser summarized, also to applause. “So, it’s not a good solution, as far as I’m concerned.”

If time allowed, she could have added that SB 76 has consistently flopped in the General Assembly, and it failed on Election Day in November when the Republican candidate who embraced the bill was defeated by the incumbent Democrat who opposed it – Gov. Tom Wolf.

Pennsylvania tax experts have joined critics of the property tax for financing public schools, but with this caveat: True, Pennsylvanians have hated the levy for centuries. And “archaic” — Mr. Pittman’s word – may be  descriptive.

But another descriptor would be “time-tested.” Aside from tinkering with the law now and then, Pennsylvanians have found no better way to ensure funding for public education in times flush or lean.

SUPPORT FOR REPEAL of the school property tax without providing reliable alternatives to pay for this core function of a democratic society is a half-measure at best, and it suggests opposition to public funding of education.

Mr. Pittman mentioned Pennsylvania’s “CNI tax.” No one asked him to spell out the acronym, and he didn’t offer. Moreover, he used a superlative that appears to have no evidence to support it.

“We are not an attractive place for employers to want to locate and grow,” Mr. Pittman said.

He prescribed another sweeping tax change – “complete overhaul of the employer tax infrastructure” — and “regulatory reform.”

“I’m not sure that we’re not already an attractive business environment in terms of taxes,” Ms. Boser concluded.

Mr. Pittman did not spell out the acronym. (It stands for “corporate net income” tax.) And he did not cite his source. (In fairness, neither did Ms. Boser.)

But the nonprofit, Washington, D.C.-based Tax Foundation suggests that his superlative – highest CNI tax in the nation – is not supported. For 2019, it reports:

Thus, Pennsylvania’s corporate tax rate may be comparatively high, but not so high as Iowa’s – or New Jersey’s. And it does not tax corporate net income at the highest rate in the nation.

More broadly, public support for reducing corporate taxes has been weak. A year before the 2018 midterm elections, nationwide public-opinion surveys showed a supermajority of registered voters said corporations pay “too little” in taxes – including a majority of Republicans.