When drug abuse is a prescription 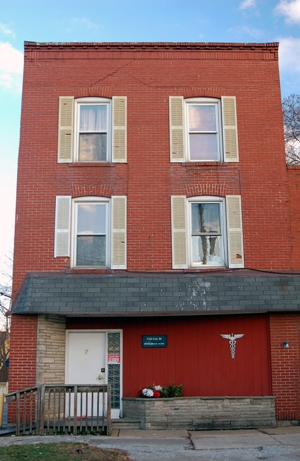 INDIANA — A student at Indiana University of Pennsylvania resisted eye contact as she recalled her fight with addiction. Her long blond hair fell over her shoulder, draping down her arm. As she pulled at her American Eagle sweater, she revealed a bruised, yellow-ish inner arm, a mark of intravenous drug use.

“The last thing I remember saying is, ‘I’ve never felt this good,'” said IUP senior Mary Williams — not her real name — in a Nov. 16 interview as she described the moments leading to her heroin overdose seven months earlier.

Williams said she had been introduced to drugs during her freshman year at IUP.

“It started with prescription pills, Adderall actually,” said Williams. “The Adderall would keep me up. So then I started to need something to help me sleep.”

Adderall is a classified as a Schedule II drug — it has a high risk of abuse but has accepted medical uses, according to the National Institute on Drug Abuse.

It is prescribed to help control symptoms of attention deficit hyperactivity disorder (ADHD), according to The National Center for Biotechnology Information. But it can cause severe psychological or physical dependence.

Williams said she never had been diagnosed with ADHD. But she received a prescription for Adderall in September 2008.

The prescription was provided by the Indiana Walk-In Clinic, 7 S. Fifth St., just south of Philadelphia Street, Williams said. Her September 2008 appointment was her first visit to the clinic. The clinic does not accept insurance and requires an $85 fee up front before treatment.

“After I paid the receptionist, the nurse took me back into a little dingy room sectioned off by a curtain,” said Williams. “When the doctor came in, he asked me three basic questions and wrote me the prescription.”

The prescription Williams received was for 60 Adderall pills, 10 milligrams each, she said. The doctor who wrote it was Dr. Tahir Usman Mir.

Mir, a graduate of King Edward Medical University in Lahore, Pakistan, is a licensed Pennsylvania physician and surgeon. He received his medical license July 1, 1977, according to the Pennsylvania Department of State.

SOME primary-care physicians will prescribe medications to patients when that domain of medicine should be left to a psychiatrist, said Dr. David M. Myers, a psychologist at IUP’s Counseling Center, during a Nov. 9 interview in his office.

“There are two walk-in clinics in town,” said Myers. “And the one off Philadelphia Street does not have a good reputation.”

Nevertheless, the Indiana Walk-In Clinic is growing in popularity, according to Williams.

“A lot of people go to the clinic for things like Xanax or Oxycontin,” said Williams.

Xanax, a drug used to treat anxiety and panic disorders is in a class of medications called benzodiazepines. It works by decreasing abnormal excitement in the brain, according to National Center for Biotechnology Information.

Oxycontin is used to relieve moderate to severe pain. It is in a class of medications called opiate (narcotic) analgesics. It works by changing the way the brain and nervous system respond to pain, according to NCBI.

Abuse of both Xanax and Oxycontin is on the rise in the United States, according to the National Institute on Drug Abuse.

“They take them or sell them,” said Williams. “And each time they go back to the clinic, the doctor ups the dosage and amount.”

ABUSE of prescription drugs is prevalent in Indiana, said Steve Olish, a case manager for the Armstrong-Indiana Drug and Alcohol Commission.

“If you go looking around in Indiana, Amrstrong County, Blairsville, you can find a dirty doctor,” said Olish.

The local trend mirrors trends nationwide. In 2006 and 2007, 80.7 percent of nonmedical users of prescription pain relievers obtained the drugs from a friend or relative for free, according to a 2009 report by the Office of Applied Studies within the federal Department of Health and Human Services. Study participants indicated that a friend or relative had obtained the drugs from just one doctor.

The study also reported that only 1.6 percent of study participants said a friend or relative had bought the drug from a drug dealer or other stranger.

Prescription drug dependence is on the rise in the United States, according to OAS. In 2002, an estimated 963,000 Americans were dependent on pain relievers in the previous year. In 2009, the number rose to 1.4 million, an increase of 49 percent.

A 2006 report showed that a rise in drug-overdose mortality was due to deaths from prescription drugs rather than from illicit drugs such as heroin and cocaine, according to the federal Centers for Disease Control.

In 2009 the problem came home to IUP when two students died of drug overdoses. On Feb. 10, 2009, Douglas James Haney, 18, of Bellefonte, was found dead in his dorm room. Haney died of an overdose of Fetanyl, a powerful synthetic opiate used for pain treatment, according to the coroner’s report. Haney did not have a prescription for Fetanyl.

On March 18, 2009, Brenton F. Croll, 18, a freshman nursing student from Roaring Spring, Pa., was pronounced dead. Croll died of a mixture of Xanax and alcohol. Croll did not have a prescription for Xanax.

“We know that when an opiate dispenser is made available to lab rats they will stop using food and water and literally use the drug until they drop over dead,” said Myers. “We are not much different.”

Admission to Pennsylvania rehabilitation centers for treatment of prescription-drug addiction has increased from 2008 to 2010, according to Armstrong-Indiana Drug and Alcohol Commission records. In 2008-2009, 6,790 patients were admitted for opiate/ synthetic addiction treatment in Pennsylvania facilities; in 2009-2010, 9,314 people were admitted statewide, an increase of 37 percent.

Olish, the Armstrong-Indiana Drug and Alcohol Commission case manager, has witnessed the increase and severity of prescription drug abuse in Indiana County.

“I tell everyone this: It ends one of three ways — rehab, jail, death,” said Olish staring blankly in his office. “I remember an IUP student that came to me with a prescription drug addiction. I told him those were his options. Eight months later I went to the jail to do an intake, and there he was.”

–Lindsey Rodrian, a junior majoring in journalism at Indiana University of Pennsylvania, is from Pittsburgh.

For more information on this story, contact the following sources:

Sidebar: To get involved/get help

For more information on drug and alcohol treatment facilities in the area, contact the following:

Sidebar:  How this story was reported

“Mary Williams,” the IUP student treated by Indiana’s Walk-In Clinic, was interviewed by the reporter of this story on Oct. 23, Nov. 16, Dec. 5 and Dec. 10. The editor also interviewed her.

The HawkEye granted the student’s request for anonymity in response to her desire to find employment in her field following graduation.